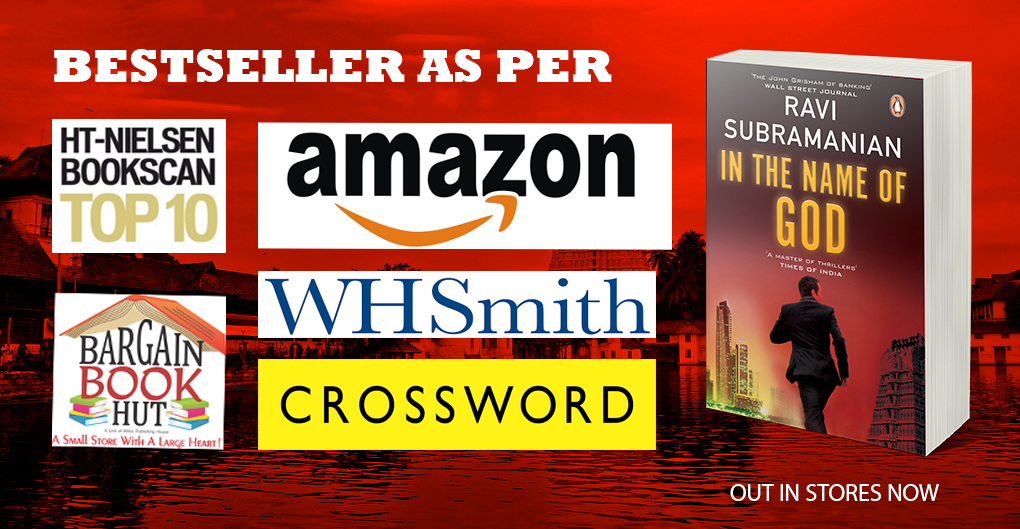 THE BESTSELLER SHE WROTE : Read the 1st chapter of my new book here (Book releases on 19th October)

The chatter in  the packed auditorium at the prestigious Indian Institute of Management, Bengaluru, had reached its crescendo, when a member of the organising committee walked up on stage and addressed the audience.

‘He has arrived, everyone. He’s talking to the Diro right now . . . should be here in three to four minutes.’

Almost immediately the conversations died down. The noise level dropped and everyone, including the two hundred students and faculty in the room, trained their eyes at the door.

‘Why him?’ someone in the front row whispered to the person seated next to him. The front row was reserved for the faculty members. The neighbour shrugged his shoulders.

‘Possibly because he brings in both perspectives—corporate experience and creative excellence . . .’

‘Don’t think so,’ the first gentleman responded with disdain. ‘I am sure it has something to do with the placement season. Pampering these corporate types always helps.’ His neighbour nodded and almost immediately stood up as did most of the people in the auditorium.

He had just walked in.

A tuxedoed emcee strode onto the stage and announced, ‘Ladies and gentlemen, it gives me great pleasure to present to you Shri Aditya Kapoor, Director—Branch Banking at National Bank, and an alumnus of our own institute,’ he paused for effect and then proudly added, ‘the Indian Institute of Management, Bengaluru!’ The firm and effective baritone, blaring out from the public address system was completely drowned in the thunderous applause that followed.

A beaming Aditya walked up to the stage and stood there, taking in the ovation. Returning here felt extra special and it showed on his face. ‘Thank you, thank you,’ he mumbled with his hands folded even as he bowed down a couple of times, in humility. ‘Thank you everyone.’

This time the applause was louder than before.

‘But today,’ the emcee said, ‘he is not here because of his achievements as a banker. Friends, even though Aditya Kapoor needs no introduction, he deserves it. Let me at least make an attempt. Not only is Aditya a banking professional par excellence, he is also India’s numero uno writer. With four books to his credit, all of them topping the fiction charts, he is the most successful new generation Indian author. In a country where 95 per cent of books published sell less than 5000 units, his books have sold over four million copies. Two of his bestsellers have already been made into films. And that’s not all; unlike the rest of his breed, Aditya Kapoor has managed to achieve the unusual feat of keeping the masses and critics equally enthused.

Today he is going to talk to us about pursuing our dreams; about his journey from a boring banker to a bestselling author. Ladies and gentlemen, presenting to you, the Paperback King of India, Aditya Kapoor. India’s most successful author . . . ever!’

The whole auditorium resonated with applause. Aditya Kapoor, who had been standing in one corner of the stage, walked up to the podium. Holding the stem of the mic, he pulled it closer to his mouth. The emcee who had been using the microphone earlier was a good ten inches shorter than Aditya’s six-foot-something frame. He cleared his throat, an act which he had rehearsed a number of times in the past and spoke into the microphone: ‘Good Evening.’

His deep baritone could make many a woman go weak in the knees. ‘It feels good to be back after fifteen years,’ Aditya carried on. There was an awed silence in the auditorium. ‘Isn’t it surprising that IIM Bengaluru has never invited me to talk about my professional exploits, something for which this institute trained me, prepared me? Instead, you have given me the honour and privilege of speaking to all of you about what I have achieved by pursuing my passion, my dreams.’

He paused and looked around the room. ‘I am here to speak not about what I have achieved, but about what I have enjoyed. Someone once said, “Find what makes you happy and go for it with all your heart. It will be hard, but I promise it will be worth it.” The fact that I am standing here in front of all of you, talking about my exploits, only goes to show that it is, in fact,’ and he again paused and looked around the room, ‘. . . that it is, in fact, truly worth every single minute that I spent pursuing my dream.’

Aditya continued, ‘When I began writing in 2008, it was for my own self. I became a writer, not only to tell a story but to broaden my own perspective. I don’t know whether readers took away any message from my books or not, but for me, writing was a process which left me intellectually enhanced. It transformed my personality completely.’

There was another round of applause.

A confident orator, Aditya went on to talk about his books, the writing process and getting published. The audience listened to him in rapt attention as he talked about his experiences and how he was able to differentiate himself in a crowded marketplace.

‘Every author puts in a fair bit of effort when he or she writes a book. But not everyone markets it well. Remember the easiest part about writing a book is . . . writing the book. The hard work starts once the book is written. The task of marketing the book and bringing the product to the reader is . . .’

‘Product? Rubbish!’ someone in the gathering exclaimed.

The voice was loud enough for at least a few in the room to have heard it. Aditya heard it too. Stopping for just a brief moment, he glanced around before moving on. He had been in such situations before. The person who had made that remark was in the minority and could be ignored.

‘Marketing the book and bringing the product to the reader is a very critical task in the entire product life cycle. If you don’t get the product into the buyers’ consideration subset, how will he or she buy it? Isn’t that what they teach you in your two years at management school? In my case, the book is the product and the readers are our consumers.’

‘Balls!’ This time the voice was louder. It sounded out like a whipcrack. ‘It’s a book for god’s sake, not a product.’

Aditya stopped as heads turned. The sound had come from the right hand corner of the auditorium. If anyone had missed it the first time, they were sure to have heard it now.

From where the sound had emanated, were two young girls. One of them looked quite embarrassed, which was enough for Aditya to confirm that it was the other one who had spoken.

‘Sorry?’ he questioned, upset at being rudely interrupted.

‘What was that?’ The girl had been a bit too loud. Maybe she didn’t realise it, but now, for him, it was a matter of his fragile male pride.

Neither of the girls responded to Aditya’s question. After what seemed like thirty seconds of uncomfortable silence, the girl who had made the comment stood up. All eyes were on her, including those of the outraged academics sitting in the front row.

‘Pardon me, Mr Kapoor, but a book is not a product,’ she spoke up. Despite her ostensible apology for her impropriety, she didn’t need any coaxing to stand up and speak. ‘A book is an expression of an author’s creativity. Do not demean it by calling it a “product”. We respect you as a good writer, as a successful professional and as a senior from our campus, but that does not mean that anything goes.’

A few whispers went up in the auditorium, gradually escalating into chatter.

‘Young lady,’ Aditya began, the quiver in his voice quite apparent. Camouflaging his thoughts had never been his strength. His face had gone red with anger. He was not going to be shown up by a young kid.

‘You are correct, but only partly. A book is not a product when an author is writing it. At that moment it is a dream. It is the purpose of existence for the author. But the moment you put a price tag on it and place it on a shelf in a bookstore, it becomes a product.’

He looked at the others in the audience and after an intentional pause, added, ‘Otherwise why even bother to sell it? Give it away for free.’

He was angry, but he had learnt that in this day and age of social media, being rude and arrogant to the audience, especially in public, was a recipe for disaster. Someone might just record it and upload it on Facebook for everyone to see, putting him at risk of brand erosion.

‘Sure,’ the girl said, ‘but there has got to be a difference between peddling a bar of soap and selling a book. A book is a lot more personal, a lot more involving. A book is not a movie. It may be entertainment, yes, but not cheap entertainment. The romance of a book is lost by the in-yourface promotion that you guys do. In any case, most of the new Indian authors write rubbish. In the name of romance, trash sells. And on top of it, you guys call a book a product! It reveals a mindset of mediocrity. Push any book, however mediocre, through an aggressive sales campaign and you have a bestseller.’ She was worked up now and sounded irritated.

Aditya forced a smile. Blood was still flooding his cheeks, rendering them pink. ‘Mediocre? Young lady . . .’ he said, catching on to the last point and conveniently ignoring the rest. He looked around the room. Everyone was waiting for his response. ‘I am sure you haven’t read my books?’

Seeming a bit embarrassed, the girl nodded in agreement.

‘Read them,’ Aditya spoke with forced humility, ‘and then call them mediocre if you want to. Half the people, who have an opinion on current Indian authors, haven’t even read them.’

He raised his right hand and pointed directly at her. ‘And as far as marketing my books is concerned—it’s simple. If I spend a year writing a book, I will leave no stone unturned in making sure that everyone knows about it, and buys it. I don’t mind my books adorning bookshelves as long as the bookshelves we are referring to are not in bookshops, but in people’s homes.’

The girl just looked at him without saying a word. Her friend sitting next to her held her hand and pulled her down. ‘Sit down,’ she whispered.

‘If after reading my book, you hate it, please write to me. I can’t refund your time, but to make up for it, I will gift you ten books of your choice. Think of it as kind of a money back guarantee.’ He attempted a smile.

‘And just to complete the discussion on promotion of books by authors, all I have to say is that after giving it their everything, an author cannot just sit back and hope that the world will appreciate his or her effort and automatically flock to stores to buy the book. So it has to be brought to the customer, quite like a product, with full focus and energy. If you still don’t agree, I am happy to engage with you offline.’

He smiled triumphantly at the audience, looked at the girl again and asked, ‘Deal?’

The girl smiled, and gave him a thumbs up. He reciprocated the gesture. Truce was called. However, the interjection had a terminal impact on his speech.

He stopped his lecture soon thereafter and they broke into a Q&A.